Skip to content
Ilona Gaynor is an assistant professor at AIADO, Designed Objects School of the Art Institute of Chicago.  In August 2018 Ilona Gaynor forwarded the following email exchange to me. It sets out an email exchange she had with Rana Hamadeh in 2017 about the latter’s earlier unauthorized use of her work.  The exchange speaks for itself.
Hello all,
I have just stumbled across the following site: http://www.setspeaks.com where the names and email addresses of yourselves were cited.
Incidentally I had sent an email to Rana back in 2017 to the same affect about a piece of work I had made and exhibited in 2011.
I’m sending this to you, because it is simply too much of a coincidence… and appears to be a pattern of Rana’s. It is behavior like this that devolves the art world, to the  point at which it receives the criticism it does.
The below response was from Rana – whom even used the same language and quotes found in cited interviews with myself from various catalogues and press in which I spoke about my work.
This behaviour needs to be highlighted and recognized as deplorable.
Best wishes
Ilona

I’m artist from London. I didn’t really want to send this email.
But I’ve asked several curators for advice and my agent in New York about my query to ask if i’m correct.
But the Big Table project from 2014 is suspiciously like my work from 2011.
I was emerging as an artist at that time (studying at RCA), but the work got a lot of notoriety… so it couldn’t have been hidden… I’ve also given talks in and around Goldsmiths as well have been published in a few of their academics published works  (Urbanomic press and so on). MY work is fairly well known within the both the Fine Art Department and Design.
Here are few images to compare so I don’t sound crazy:
So obviously artists take influence and nothing is new etc. But your description and reasoning for work is incredibly similar too.
I won’t link to press articles – but here is the description on my site.
I was alerted to this by an old Professor from the RCA who taught me and several curators from the Nieuwe Institute.
So as it stands there seems to be no reasonable doubt as to the borrowing of my work and my ideas. What do you suggest we do about this? But I’m giving you chance to explain this contention.
You are nominated for a prize… so this is a problem.
http://www.ilonagaynor.co.uk/Everything_Ends_In_Chaos/ 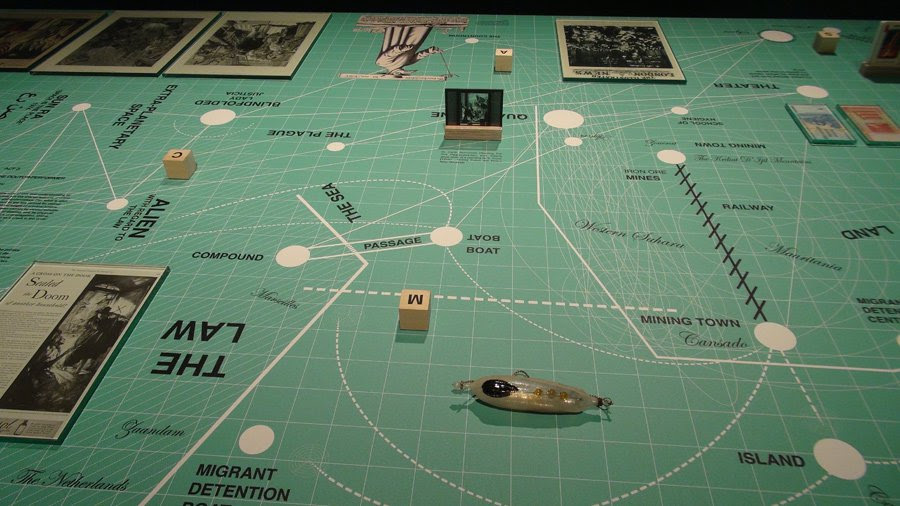 *
The Department of No
Ilona Gaynor
Artist / Director
Assistant Professor
AIADO, Designed Objects
School of the Art Institute
of Chicago
———- Forwarded message ———-
From: Rana Hamadeh
Date: Fri, Feb 24, 2017 at 12:29 PM
Subject: Re: Everything End in Chaos and the Big Table
To: Ilona Gaynor

Thank you very much for your email, which I have to admit, has left me in shock. I have never come across your name, work or practice before you sent me this email; and it upsets and surprises me to read that you think that “there is no reasonable doubt as to the borrowing of your work and your ideas”.
My work titled ‘The Big Board or… And Before it Falls it is Only Reasonable to Enjoy Life a Little‘ (2013) is a cartographic stage-set for a performative work that thinks through the notions of resistance, immunity and hygiene. It takes the plague of Athens as an analogy for the Syrian uprising, and maps out a script that I have written on questions regarding the relations of justice and theatre.The work’s claims and propositions are extremely particular to my thinking and relating to my own Lebanese/Syrian context. With this radically different background and content, I really do not see how you came to the conclusion that there is a resemblance between our works.

On a visual level, using generic Illustrator program tools to map out a thinking process is something that many people do. The use of a diagrammatic format as a way for representing a set of connections is something that you apparently use in your work just as much as I do, but diagrams are used by millions of people to illustrate constellations of thoughts; they are not in any way an artist’s invention. Also, using a table in itself is nothing new. I designed ‘The big board…’ to resemble war tables. This is an example of the kind of references I was looking at for this work: http://dynabowl.com/wp-content/uploads/2014/06/War-Room.jpg. I was looking also at billiard tables and game boards in general as well as the war room scene from Doctor Strangelove. In the performance, the audience assembles around the table, like in a board meeting, during which I mobilize the thoughts that are mapped out on the table etc…

Other than the use of diagrams and a table – both in no way a unique choice – I feel that the similarity between our works is very limited: the visual design is completely different and our works express totally different thoughts.

There also seems to be some confusion on your behalf regarding what is part of my work and what is not: You compare an installation photo of your work, with images/videos on the wall in the background that I assume are part of your work, with an exhibition photo that includes The Big Board. Please be aware that this photo is taken in a group show, and the photographs on the wall are not part of my work but the works of another artist.

You also mentioned Goldsmiths. I visit London and Goldsmiths a couple of times a year for ca. three days as an auditor within the seminars of the Curatorial Knowledge PhD programme. This programme is part of the Visual Cultures department, and as these extensive and quite secluded seminars are from morning till late in the night, I spend my time with the Curatorial Knowledgegroup, that is basically my connection within Goldsmiths, and not with the fine art or design departments.

I hope that, in the midst of all my work and deadlines, I have explained enough, even though I find it very unsettling that I have to explain my practice to anyone in light of an unfortunate accusation as such.
With all my best regards and wishing you all the best with your practice,